As amongst the world’s largest food and beverage company, Nestlé is committed to enhancing the quality of life, livelihoods and local economy of the countries in which it operates. The company continues to contribute to the development of Bangladesh and was recently recognized as one of the top taxpayers in the country. Nestlé Bangladesh received the Bangladesh government’s Tax Card Award 2016 for being the highest taxpayer in the food category at the national level for 2015-16, which is also a recognition of the company’s compliant tax practices. The awards were given by the National Board of Revenue which awarded the top taxpaying companies of the year in 14 categories. The ceremony was presided by the Chairman, National Board of Revenue, Mr. Md. Nojibur Rahman, and attended by guests Mr. Abul Maal Abdul Muhit MP, Minister for Finance, and Mr. Amir Hossain Amu MP, Minister for Industries. 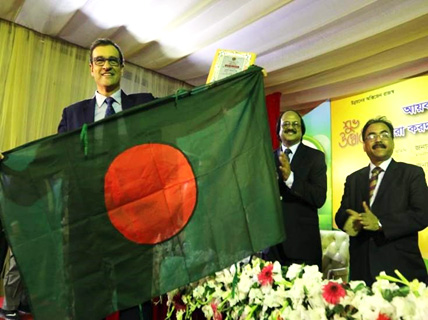