Skip to main content
MAGGI Noodles is the most loved instant noodles in Bangladesh which has won the hearts of Bangladeshi families over the last 2 decades. MAGGI offers tasty and healthy solution, with its noodles range in unique flavours.

The classic MAGGI 2minutes Masala Noodles is fortified with Vitamin A, Iron and Iodine. The tastemaker is comprised of popular ingredients typically found in Bangladeshi households, such as turmeric, pepper, coriander, ginger and cardamom. To boost the goodness in your bowl, add colourful vegetables and lean protein such as chicken. 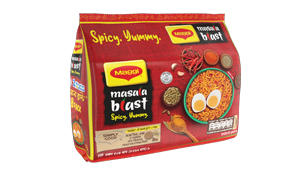 MAGGI MASALA BLAST is Yummy and Spicy Noodles especially for the teenagers who love to have hot and spicy foods. Like our Masala range, this variant is also fortified with Vitamin A and Iodine. Besides, its unique tastemaker is comprised of the ingredients that consumers know and love such as red chilli, turmeric, black pepper, onion, ginger and cardamom sourced from both home and abroad.

Inspired from the street-style flavors of Bangkok, one of the world’s most famous culinary destinations, MAGGI has launched a new MAGGI Fusian Noodles in Bangkok Sweet Chili flavor. It is a fusion of spicy red chili complimented by sweet note of ginger & lemongrass. This flavor will truly tingle your tastebud!